How Accurate Is Google Translate?

You may be wondering how accurate Google Translate is and whether it can replace a professional translation. Read our post to find out more on this subject! 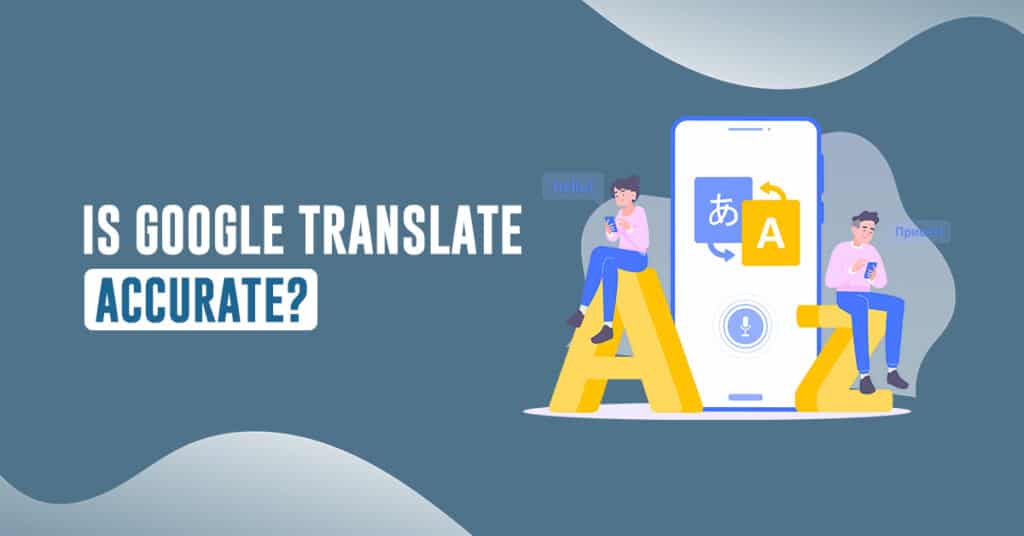 Most of us need a written translation at some point. Then we have to decide whether we use a professional agency or try to do it ourselves with the help of some translation tool, like Google Translate. Using machine translation is fast and does not cost you a thing, so it may sound tempting to have the work done without any expense on your part.

However, there is a very significant question to be asked – is Google Translate accurate? After all, precision is crucial for translations and helps us avoid misunderstandings associated with, for example, cultural context or ambiguities in a particular language. Let us tell you more about the accuracy of Google Translate!

What Is Google Translate and How Does It Work?

Google Translate is a free multilingual neural machine translation service launched by Google in April 2006 and updated ever since. It has a website interface and a mobile app for both iOS and Android, and is nowadays used mostly for providing translation of texts and websites in over 100 languages.

Before neural machine translation was introduced, Google Translate worked in a word-for-word way in most cases. The tool was simply replacing separate words and phrases in the source language with the equivalent ones in the target language, taking into consideration vital grammar rules. Back then, nobody wondered how good Google Translate was – everyone knew that it lacked accuracy for longer pieces of content.

With a modern neural system, the smallest unit that the tool analyzes is not a word but a sentence fragment. For this reason, it can operate on the semantics of the content and separate the sentences into dictionary segments, helping it to take the context into account.

However, this does not mean that Google Translate tries to understand every sentence’s meaning, as would be the case with a human translator. Instead, it is all about maths and odds!  Such automatic translation is in fact based on statistical occurrence.

Google has developed enormous databases of existing content translations prepared by human professionals over many years, considered to be of high accuracy and reliability. From these, numerous statistical matches have been created. It means that if a given word or phrase has been most often translated in a particular way, it has the highest chance of being correct. Hence, Google Translate separates every sentence into fragments and searches for a match in its database to increase the probability of accuracy.

Why Is It Still Better to Use a Professional Translation Than Google Translate?

When Google Translate was developed, many human translators feared that they would eventually lose their jobs, as machine translations would become more and more accurate. However, this software is still far from perfect, so learning foreign languages is still a valuable skill! If you really want your content to have accurate meaning in a foreign language, it is still worth turning to professional translators such as Architekst. Here are some reasons why:

Google Translate Cannot Follow Instructions or Do Any Research

One of the disadvantages of Google Translate is that it cannot understand and follow any translating instructions provided. For example, before working with technical content, a professional translator may need to learn a few directives, such as not translating chemical compounds, measurement units etc. There may also be proper names that should not be translated to avoid a ridiculous effect. Apart from that, human translators can do research if necessary and check if their translation is correct in a particular field. When it comes to Google Translate, the translation will just be done blindly.

There Is No Proofreading

Although professional translators strive for perfection, sometimes small human errors will occur. However, unlike with machine translation like Google Translate, human translation includes proofreading to find and eliminate such errors. In many agencies, the translations are not only checked by their authors but also by other professionals to reduce the risk of mistakes. It is particularly crucial in, for instance, a medical, technical, or business translation.

Some people try to verify Google Translate’s accuracy with back translations. It means that they retranslate the text from the target language to the source one again to check if it sounds more or less like the original. This can, of course, help in highlighting some errors, but you will probably not be able to see all the inaccuracies. Also, if you cannot speak the target language, even if you spot a mistake after having the text translated back, you will not be able to correct it properly in the translation.

Transcreation Is Not Possible

One of the primary aspects you need to be aware of if you want to expand your business and reach consumers from other countries is definitely transcreation. This technique is a combination of translation and creation, aimed at conveying the brand’s marketing message  within a particular cultural context. Reaching a specific audience requires a lot more than just a direct translation – a translator needs to make a message accessible to people in a specific geographic area.

To achieve this effect, you need to use specialist services. A machine such as Google Translate cannot understand the cultural context to the same degree as a native speaker or a person who has been learning about a chosen language and country in-depth.

All the Puns and Jokes Can Be Lost in Translation

In marketing materials and a lot of other content, it may be vital to understand a pun or a joke, or to communicate sarcasm. As Google Translate does not know what it is translating but just works on the basis of statistical matches, it may completely ruin your creative content. Conveying something funny and original in a different language is not easy even for a person experienced in translation, but it is basically impossible for a machine.

Mistakes in The Source Text Will Not Be Corrected

Sometimes it happens that there are errors in the source content, such as spelling or logical issues. For example, while working with an instruction manual, a human translator may notice that the text says that a given element is on the left while the drawing shows it on the right. In such a case, they will contact you to check which version is correct in order to translate it properly to another language. Google Translate will never notice such discrepancies – it will just reflect the same message that was provided in the original content, copying mistakes that can turn out to be very problematic or even dangerous.

There Can Be Confidentiality Issues

When you use a qualified translator’s services, you can be sure that all your personal data and other confidential information are safe. This is particularly true of sworn translation where a specialist is legally bound not to reveal anything about the documents he or she is working with.

Bear in mind that if you use Google Translate, this is not the case. If you go to Google’s terms of service, you will find this legal notice:

“When you upload, submit, store, send or receive content to or through our Services, you give Google (and those we work with) a worldwide licence to use, host, store, reproduce, modify, create derivative works (such as those resulting from translations, adaptations or other changes that we make so that your content works better with our Services), communicate, publish, publicly perform, publicly display and distribute such content.”

For this reason, if you have something confidential to convey in another language, using a trusted translation service that will grant you more privacy than Google is definitely to be recommended.

How Is Translation in Google Rated by Users?

Bear in mind that despite being amazingly intelligent and useful by software standards, Google Translate is still not that accurate, especially as the translation quality depends on the languages you choose.

Google asked people to rate their translations in particular language pairs, and, for example, Chinese to English was rated 4.3, while English to Spanish was evaluated higher at 5.43. Generally, Google Translate works better with European languages such as German, Finnish or Danish, but has problems with several Asian languages or dead languages, like Latin or Ancient Greek.

Overall, after becoming a phrase-based machine translation service, Google Translate started to be 60 per cent more accurate, but it still cannot replace a qualified translator.

All in all, it is fine to use Google Translate if you just do not understand a word or a short phrase, or even a longer text if it is only for private purposes. However, the most accurate translator is still a qualified human one, so if you need the text to be fully correct and sound natural in a particular language, it is best to use the services provided by a trusted and experienced agency, such as Architekst.

Our translation work is always carried out and proofread with the utmost care because we believe accuracy is crucial in this field. We often work with legal or technical documents, as well as market research and many other types of content, paying attention to every single detail to achieve the best possible results. With our translation services, you will avoid misunderstandings or embarrassment that could harm your professional image.

We offer translation both to and from English, combined with many different languages, from Albanian to Zulu. Contact us to find out what we can do for you!

Also interesting: The Tower of Babel: The Translation Profession Is Born