How to Say ‘Thank You’ in Different Languages

Have you ever wondered how to say “thank you” in a different language? Express your gratitude properly using our handy list of thank-yous in over 30 languages! 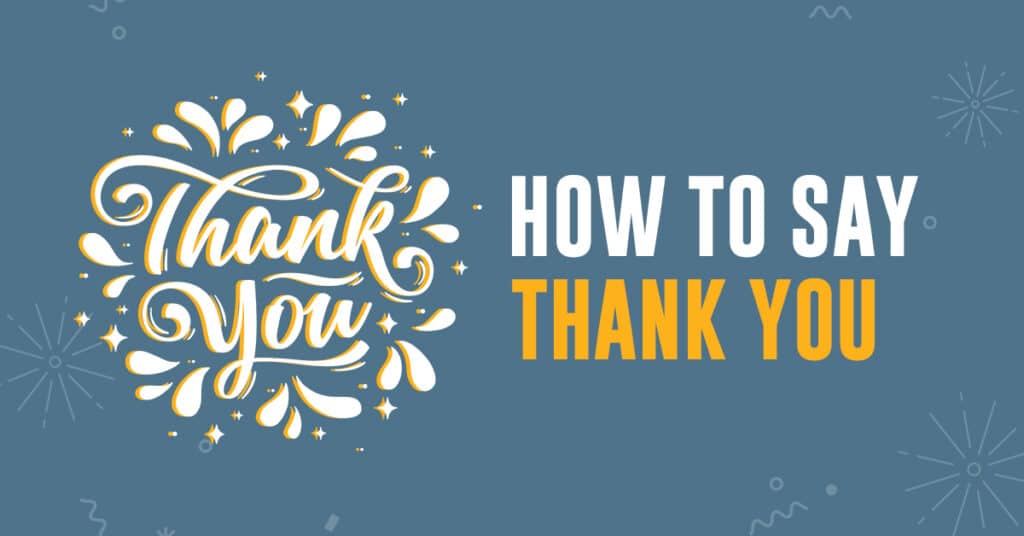 Expressing gratitude is one of the most important gestures in our day-to-day lives.

Knowing how to say “thank you” in different languages can go a long way in certain cultures, especially those that hold interpersonal relationships in high regard.

Having some knowledge of the basics of a foreign language is also useful for international businesspeople.

If you’re conducting business in a foreign country, especially a very distant one, a simple “thank you” in the native tongue of your business partner can open up a lot of doors.

If you don’t have any previous experience with foreign languages, don’t fret!

We’ve prepared this handy list of thank-yous in over 30 different languages so that you know how to properly express your gratitude the next time you go abroad!

Thank You in European Languages

Many languages in Europe are derived from either Latin or Germanic families of languages, so you might find that a lot of the ways to say “thank you” are actually quite similar to each other (ex. Italian – grazie and Spanish – gracias).

This is due to the fact that most European languages can be grouped together and traced back to one tongue that gave rise to all of them, whether it’s Latin or an ancient form of German.

Thank You in Asian Languages

When compared to their European counterparts, Asian languages are definitely much more diverse, at least in the ways you can say “thank you” in various Asian countries.

With the exception of Malay, which is the official language in four states (Brunei, Malaysia, Indonesia, and Singapore), there aren’t many common characteristics that can unify the various languages spoken in Asia.

Thank You in Other Languages

Of course, the world does not end in Europe and Asia. However, due to the fact that many Latin American and African languages have been imported from Europe with slight modifications, we have only included these two continents in our list.

Here’s how to say “thank you” in languages that could not be placed in the categories above.

Regardless of whether you’re preparing for an international business trip or foreign holiday, or you’re simply curious about the ways in which people communicate around the world, knowing how to say “thank you” in various languages can prove to be very helpful.

Not to mention the fact that being able to express gratitude in a person’s native tongue, despite not being particularly fluent in it, is a sign of respect and appreciation for their culture, language and customs.

Bear in mind that the world of languages and multilingual interactions does not end at a simple “thank you”. Translation services like ours at Architekst can help you bridge the language barrier between you and your foreign business partners. See how we can help you today!

Do you want to know the most famous polyglots? Read our next article!