How Many Languages Are Spoken in China?

Accurate and appropriate communication is vital for conducting business there, but the sheer number of languages spoken in China may surprise you! 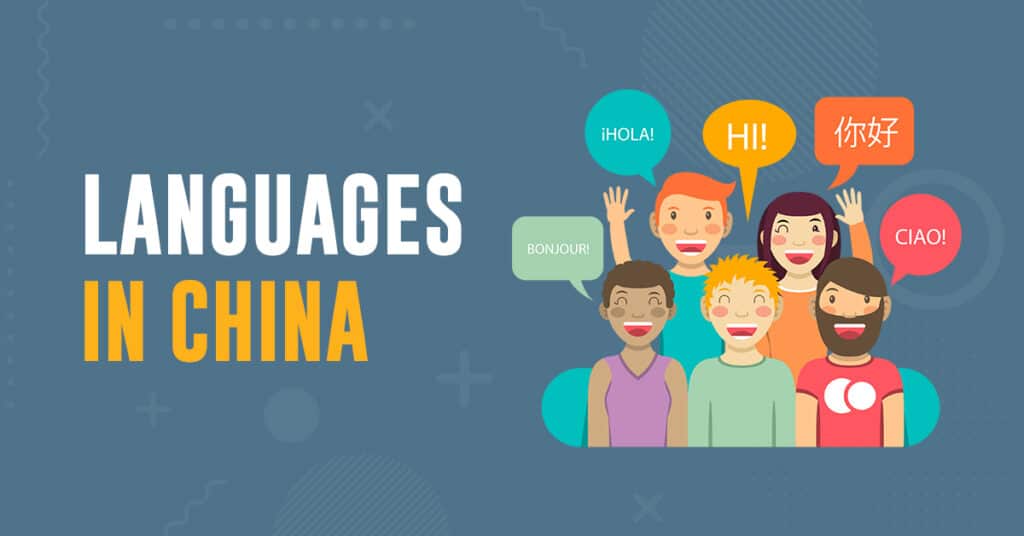 China is a vast, diverse country spanning 9.5 million square kilometres, with a population of 1.4 billion people.

The numbers themselves can suggest some pretty significant differences when it comes to how people across the People’s Republic of China live, eat, and, most importantly – communicate.

Even though there is only one official language of China, which is Standard Mandarin, it can be broken up into countless dialects, some of which bear very little resemblance to the official iteration of Mandarin Chinese.

Despite the fact that there is no second, government-mandated official language, places like Hong Kong, Macau, and various Chinese provinces do use other languages to communicate on a daily basis.

All in all, thirteen distinct languages are spoken in China. This is counting out some of the dying languages and dialects that are considered separate languages by some scholars.

If we were to count those in, the number of languages spoken in China would skyrocket to 308! Of course, not all of them enjoy the same popularity as others, but they are a significant part of the country’s cultural makeup nonetheless and deserve to be mentioned in this article. After all, with the sheer size of China’s population, even some of the fringe languages can have millions of speakers!

If you’re planning on travelling to China and want to improve your conversational capabilities, or you need translation services for documents that are to be transcribed into one of the Chinese languages, keep on reading this article.

Working with Chinese businesses can be highly lucrative, especially given the sheer size of the Chinese market! Many foreign enterprises are desperate for a slice of that pie, but a lot of them fail due to poor communication efforts. We’ll bring you up to speed on how many languages are spoken in China, as well as which one of them has the most speakers so that you can prepare accordingly!

Without factoring in foreign languages that are often used in mainland China, such as English or Portuguese, there are a whopping thirteen tongues that are used on a daily basis in the country. Below, you can find a handy list containing each one of them, along with brief descriptions.

This is the “lingua franca” of the People’s Republic of China. As the country’s official language with 1.3 billion native speakers, it is not only the most widely spoken language in China but also the entire world!

Even though it is the official language in China, you should be aware of the fact that, much like most of the languages on this list, Mandarin branches out to various dialects and variations. The Beijing dialect is the primary phonetic basis for the so-called Standard Chinese or “putonghua,” but you’re not going to encounter it everywhere you go in China.

From Sichuan to Shanghai, there are dozens of Standard Chinese dialects, and not all of them are similar to each other. Combine that with the fact that it is a tonal language that uses four tones to distinguish between words that otherwise sound the same, and you’re in for years of studying if you want to master the language.

The dialects are not the only differences that separate the variations of standard Mandarin. The other major one is writing. Most of mainland China uses simplified Chinese characters, which were introduced in 1949 as a means of increasing literacy in the People’s Republic. Taiwan, Hong Kong, and Macau, however, have stuck with the more complex, traditional Chinese characters. They are also often used by the Chinese communities living abroad.

This language is spoken in the Zhejiang province, certain parts of the Jiangsu province, as well as in the city of Shanghai. With “only” 80 million speakers,  you might have trouble getting around using Wu, even in the areas mentioned above, especially considering that it also branches out into dozens of different dialects!

The number of Wu speakers may suggest that it is a major language, but you should remember that it is not one of the official languages used in China. Knowing it may score you some points with the local populace in Shanghai or the Zhejiang province, but don’t expect to be able to sort out any administration matters using Wu.

Known in China as “Yue,” the Cantonese language is probably the second most important language in all of China. It is commonly spoken in the south of the country, most notably in Guangzhou, Hong Kong, and Macau. Given how these cities are major trading hubs, foreign businessmen stand to gain a lot from learning how to speak Yue Cantonese.

The Uighur language is used by the Uighur Muslim minorities in the Xinjiang province in the west of China. It belongs to the Turkic group of languages, and as such, it shares more similarities with Arabic and Turkish than Mandarin.

It is one of the two main branches of Min Chinese. You can find Min Nan speakers in the Fujian province, as well as some parts of Zhejiang and the majority of Taiwan. Interestingly enough, it is also a popular language among the Chinese diaspora in places like New York City or the Philippines.

Min Bei is the second, less popular branch of Min Chinese. You may encounter it in north-western Fujian, more particularly the Nanping prefecture. It’s got a little over 2 million speakers and six dialects, but as opposed to Min Nan, you’re not likely to find many people who can use it outside of the aforementioned Nanping prefecture.

Although the Gan Chinese language is not as internationally popularised as Mandarin, Cantonese, or Min Nan, it is actually a very widely spoken language in parts of South-Central China, namely the Jianxi, Hubei, Anhui, and Hunan province. With 22 million speakers concentrated in these areas, knowing Gan could be useful, especially if you plan to do business in that region.

It is the native language of the Hakka people, who occupy areas in Southern China, most prominently Guangdong, Hong Kong, and Macau. It is recognized as one of the official languages in Taiwan, but not in mainland China.

As of 2007, it had a whopping 47 million speakers, but this number has been steadily decreasing as most younger Hakka generations use Cantonese more frequently due to cultural and social assimilation.

You’re most likely to encounter Xiang speakers in Hunan. This language is also used in its neighbouring provinces, namely Hubei and Guangxi. Parts of Guizhou are also home to Xiang speakers.

Despite the fact that it is not recognised as an official language, Hunanese Xiang speakers include some of the most prominent people in Modern Chinese history, most famously Mao Zedong, the founding father of the People’s Republic. It is still going strong to this day, with an estimated 38 million people using this Chinese language .

Mostly concentrated in the Guangxi province, the Zhuang language is not the most spoken language in China by any margin, but with 16 million speakers, people are still keen on using it to this day. It is characterised by many foreign influences, mainly the Thai and Vietnamese languages, which should not come as a surprise, given that the Guangxi province borders Vietnam.

Although it is not a Chinese language per se, we had to include it in our list. Inner Mongolia is a province of China, and with 4.1 million ethnic Mongols inhabiting that part of the country, it is a significant part of the region’s cultural makeup. It is used alongside Mandarin in Inner Mongolian TV channels and newspapers.

Known in China as Fuyu Kyrgyz or Manchurian Kyrgyz, it is a Turkic language that bears a resemblance to the Khakas languages spoken by the Yenisei people, native to Siberia. Fuyu Kyrgyz is mostly used in the northern Heilongjiang province by the descendants of Yenisei Kirghiz who were deported to Northeast China in the late 16th century.

Tibetan is, alongside Simplified Chinese, the official language of the Tibet Autonomous Region. This makes the Tibet Autonomous Region a very special case, as other Chinese provinces do not have two official languages. In many cases, it even boasts prevalence over Mandarin, particularly in schools – 98% of primary education in Tibet is carried out in the Standard Tibetan language.

Even though China’s cultural landscape is rich in various languages and dialects, many of which have long, fascinating histories, unfortunately, this does not have an impact on the state of foreign language learning in most of mainland China.

Outside of the major cities, such as Beijing or Shanghai, you won’t find many people who can speak basic English. Even in those metropolises, the ability to get by in English is not a given. The special administrative regions of Hong Kong and Macau are exceptions to this rule – until fairly recently, Hong Kong was a British colony, and Macau belonged to Portugal. This is why the native populace of these regions can use these languages alongside Cantonese.

Now you know what languages are spoken in China, as well as how they are distributed across the country. Hopefully, this article has helped you understand the Chinese linguistic and cultural makeup a little better, maybe even inspiring you to take a shot at learning one of these Chinese languages!

Bear in mind that aside from the officially recognised tongues, there is also the matter of dialect and region-specific language mixtures, such as Sino-Tibetan. Don’t forget to take these cultural factors into account if you ever travel to China.

Aside from the few exceptions, you may find it downright impossible to rely on English to convey your messages accurately in China. This is why, if you’re engaged in any sort of business activity in that part of the world, it might be a good idea to enlist the services of a reputable translation agency, such as Architekst, to handle your China communications and make sure that no meaning gets lost along the way.

Our experts can help you transcribe your documents and messages not only into Mandarin but also some of the less widely spoken Chinese languages.

We also invite you to read our other article about famous polyglots or you can check out our analysis on the many English Speaking Countries across Europe.