The Hardest Languages for English Speakers To Learn

We all know that learning languages can be beneficial, but which are the most difficult languages for English speakers to learn? Find out in this article. 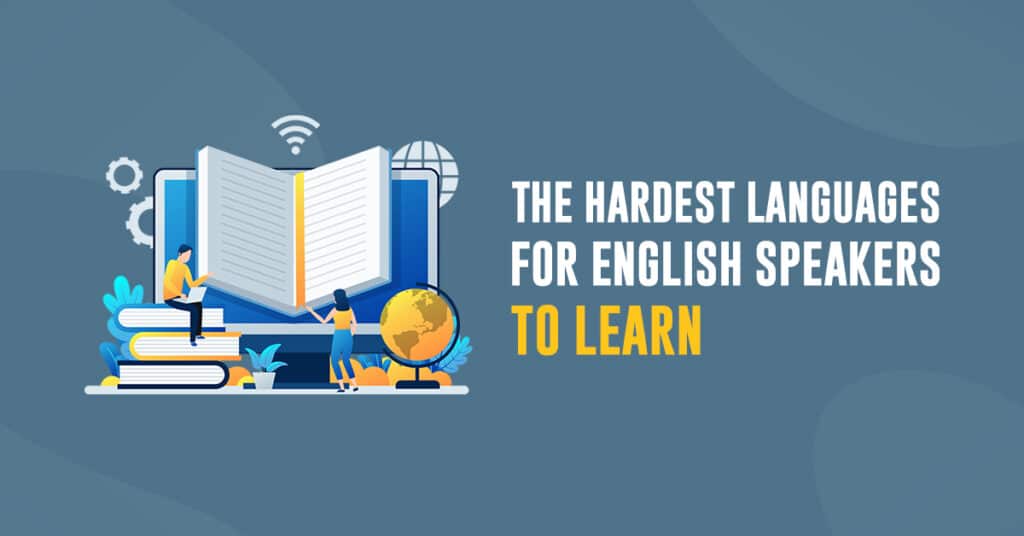 There is a good chance that regardless of your background, job position or personal interests, you know at least one other language apart from just English itself.

That’s not a huge surprise if we consider how interconnected today’s world is. Excellent language skills can help you develop a great career, and enable you to get to know fascinating people on your trips to foreign countries.

Although learning languages is also a great way to expand your horizons, if you decide that you want to learn Hungarian, Polish, or Cantonese, you just might find the challenge too great! You might even start to wonder which languages are the most difficult to learn.

Although native speakers of the languages widely considered to be the hardest will fiercely argue that theirs is the hardest language to learn, this issue is rather complex. Why?

Factors That Influence the Learning Experience

In a moment, we’ll share a list of the hardest languages, but some people might find them much easier than those that don’t appear on our list. Why? If you are a native speaker of a language that belongs to the same language family as the language you are trying to learn, then even though it might be considered pretty difficult, you’ll have an advantage over those whose native language isn’t as closely related.

Apart from the details of the language itself, you might find learning another language to be a much more efficient process if you use a skilful language tutor.

You don’t have to be a native speaker of French to discover that learning fellow Romance language Spanish is not that difficult. If you know some French grammar and vocabulary, it will help you learn the languages in the same language family. And let’s not underestimate the importance of motivation.

If you plan to move to another country in a few years’ time, or your loved one speaks a different language, you will probably be more willing to learn challenging grammar rules!

Even though learning Cantonese might be truly a challenging experience, the confusion starts even before you begin the learning process. That’s because it isn’t entirely clear, with the experts differing in their opinions, whether Cantonese is a dialect of Chinese or a language on its own.

Regardless of what your opinion is, you will find out that native English speakers generally have a hard time learning Cantonese. The trouble starts with the Cantonese script that is unusually difficult to read, especially for people who are used to the Latin alphabet. Its characters aren’t counted in dozens but in tens of thousands. You don’t need to learn all of them, as learning 3 to 4 thousand characters should be enough to speak rather fluently – the rest of the characters are rarely used.

But if you don’t have a decent memory, you might find this task intensely hard. And that’s not all. Cantonese is a tonal language, which means that depending on its pitch, the same word can have a variety of meanings. Consequently, learning to understand spoken Cantonese and also to produce a correct pitch is going to be difficult.

None of the European languages, including English, is tonal, which means the pitch that you use whilst saying a certain word doesn’t matter – the meaning of the word stays the same. At most, a change of pitch might be used to convey emotions such as surprise, anger or excitement. However, when it comes to Cantonese, the way you say a word matters a great deal.

Hungarian, which is a Finno-Ugric language, doesn’t share many similarities with the languages of its neighbouring countries, such as Slovakian, Romanian or Serbian. Instead there are more similarities between Hungarian and Finnish or Estonian, and if you know anything about any of these languages, you know that means trouble.

Not only is the word order fairly flexible, allowing for a great deal of creativity, but it is also agglutinative, which means that the words can contain a high number of morphemes (small units of meaning which make up a word). As a result, when starting to learn Hungarian, you might be initially intimidated by long words with lots of consonants.

A majority of Europeans, including English speakers, will find that Hungarian is an insanely challenging language to learn, especially since knowledge of other languages from the region isn’t going to make the learning process easier.

There are plenty of dialects of Arabic, so the exact learning experience will vary, depending on the variety you choose, but we have to warn you: it won’t be easy. Though you won’t have as big a problem with the script as when learning Cantonese, or any other Chinese dialect for that matter, Arabic doesn’t use the Latin alphabet either.

As a result, before you start learning Arabic vocabulary or grammar rules, you have to get acquainted with its script first. That’s not all – to make matters worse, it is written from right to left, which English speakers are likely to find confusing at the beginning. Although you won’t find capital letters in Arabic, the same letter looks different depending on whether it is at the beginning of a word, in the middle, or at the end.

English speakers are also going to be surprised by the lack of short vowels in writing. On top of that, Arabic grammar isn’t the easiest either, and you might have to spend a lot of time getting used to uncommon sentence structures. However, we think that learning Arabic is worth it, as it is the official language in 27 countries, which means that you’ll benefit from knowing it in plenty of places.

If you think that Hungarian is difficult to learn, you likely won’t have a much easier time with Polish, a West Slavic language. Although the two countries are located not far from each other, their languages don’t share many, if any, similarities. If you dislike learning grammar rules, then you might face an insurmountable challenge when dealing with the seven cases that can be found in Polish!

And although Polish grammar is famously convoluted, English speakers will find Polish pronunciation even more problematic. The Polish word for ‘çonsequence’ is ‘następstwo’, whereas ‘ruthless’ is ‘bezwzględny’. And let’s not forget about ‘Grzegorz Brzęczyszczykiewicz’, which looks like a word created to sow fear in the hearts of Earthlings, but it’s not; it’s just the Polish language.

When learning Polish, you may start to suspect that the Polish language is complex on purpose, with native speakers jumbling consonants together and looking at the result with pride, especially if pronouncing the word is particularly challenging.

Numbers are another source of pain for all students of Polish. Are there more numbers in Polish than in English? No, but the ways to pronounce them are, to put it mildly, more numerous. When you want to say the number ‘2’ in English, you don’t have to think hard about how to say it. In Polish, on the other hand, you’ll have to choose from among 22 different ways to pronounce any of the numbers. Yep, it’s certainly a struggle.

The discussion about what the most difficult languages in the world are is unlikely to end anytime soon. That’s because the verdict depends on numerous factors, such as your background, history of learning similar languages and your motivation levels.

Yet despite the subjective nature of such an assessment, some languages, like Cantonese, Hungarian, Arabic, or Polish do appear on such “difficult” lists much more commonly than others, such as French, Spanish, or Dutch. To learn some of them you have to master a different script, which might be especially difficult if you are learning any of the Chinese dialects.

Even if you decide that you don’t need to learn Chinese, and you would rather spend time perfecting your Polish or Hungarian, you are bound to get frustrated at times.

However, most of the things that are truly worthwhile in this world don’t come easily, and if you love a good challenge, then you should start your journey with one or more of these languages.