If you want to know which famous people are or were polyglots and what the benefits of speaking several languages are, you have found the right place! 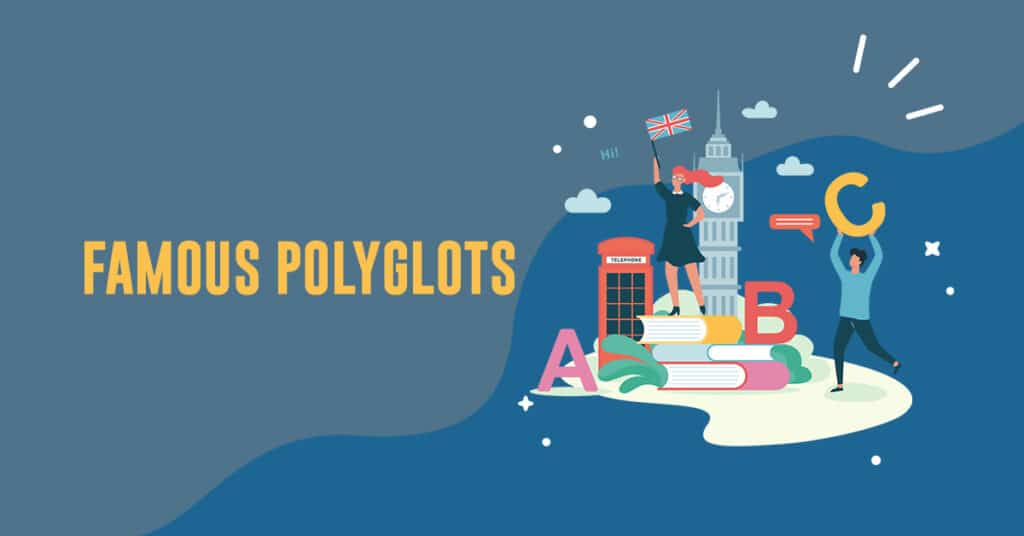 In today’s globalised world, it should be obvious that speaking several languages is an invaluable asset. Tourism, migration, international business expansion, not to mention browsing the internet…

Machine translation and numerous types of translation software can be beneficial, but they are no substitute for actual human-to-human interaction. After all, there’s so much more to effective communication than overcoming a language barrier.

Some people understand this, and hence the importance of learning languages – you might know some of them from the media, newspapers or history. They may have different reasons for this; their job may involve a lot of travelling, for instance.

Have you ever wondered how many famous polyglots there are? How many languages does Shakira speak? Who are the famous historical figures or celebrities who speak or spoke different languages?

Read on to discover some names as well as the benefits of being a polyglot!

The famous Oscar-winning actress is one of the most widely-known polyglots among celebrities. Born in Israel to an Israeli father and American mother, she later moved to the United States; she therefore grew up speaking both Hebrew and English.

Aside from her acting talent, she is known for her thirst for knowledge (she’s a Harvard graduate with a BA in psychology), and since she was raised as a bilingual-speaker, she’s also an avid learner of languages. Today she speaks not only English and Hebrew, but also Arabic, German, French, Spanish, and Japanese.

She’s a native-speaker of the first two and has conversational abilities in the rest, giving interviews and participating in tv programs in all of them.

Shakira was born in Columbia, so her native language is Spanish.

Apart from that, she can also speak English and Portuguese, both fluently – the former because of her early boyfriend and later international career, and the latter because of an extended music tour she did in Brazil during her teens. Moreover, she’s reported to be able to communicate in Italian, Catalan, and Arabic.

Right now, as a mother, she often stresses the importance of multilingualism and has tried to expose her sons to numerous languages from the very beginning.

A lot of people don’t realise that the famous actress and humanitarian was actually born as Audrey Kathleen Ruston in Belgium, and later moved to the Netherlands.

Her father was Austrian-British and her mother, Dutch. She grew up speaking both English and Dutch, which later also helped her save herself from the Nazis, as she easily passed for a Dutch girl.

After the war, to help her acting career and due to her travels, she learned to speak Spanish, French, and Italian.

Aside from being an incredibly gifted tennis player, Federer has also shown a talent for languages.

As a Swiss, he needs to be able to communicate in at least two of Switzerland’s official languages, but he actually speaks three: Swiss-French, Swiss-German, and Italian. Moreover, thanks to his chosen career path, he’s now fluent in English.

He also learned to speak Swedish quite recently, asserting himself as one of the most famous polyglots.

The famous Danish-American actor is probably most known worldwide due to its role as Aragorn in The Lord of the Rings trilogy. Due to his heritage, he speaks English and Danish fluently; he’s also proficient in Spanish.

But that’s not all – he can also easily communicate in French, Italian, Swedish, and Norwegian. Interesting fact: he picked up quite a lot of Tolkien’s Elvish language for his portrayal of Aragorn.

Famous for his role as an evil Austrian SS officer Colonel Hans Landa (who switched between English, German, Italian, and French), Austrian actor Christoph Waltz is no less impressive when it comes to communicating in a variety of languages.

He is either fluent or at least capable of speaking in English, French, Italian, and his native German. He’s so proficient in French that he himself dubs his movies into this language.

Dealing with international affairs used to be much more difficult in the past than it is now with translators and software available at hand.

If there was a politician, not to mention a king or a queen, who wanted to stay on top of things, they needed to communicate efficiently in several foreign languages at least.

It’s not an exaggeration to say that Tolkien is one of the most famous polyglots and most impressive linguists in the history of humankind.

The father of Middle Earth was a remarkable figure even among the most talented polyglots – he could speak 35 (!) different languages, both modern and ancient.

He became so proficient in learning languages that at some point he learned Finnish just for fun. But that’s not all – he used that impressive knowledge and ability to create languages of his own, the most widely-known being Quenya, one of the Elvish languages from his books.

The famous 19th-century inventor, most notably known for developing the alternating-current electric system, was Serbian, hence his ability to speak Serbo-Croatian.

But not many people know that his impressive mind also gave him the ability to learn languages incredibly fast.

In addition to his mother tongue, he could communicate effectively in English, French, Italian, Czech, German, Latin, and Hungarian.

The famous Irish writer was known for his love of languages and literature. He was initially a teacher and a translator; he taught English all over Europe and during his travels he was able to pick up a variety of other languages, including Italian, German, and French.

It is hard to determine how many he actually spoke, but he’s most often credited with communicating in between 13 and 17 other languages. His Ulysses contains fragments in Hebrew, Latin, Greek, Spanish, Irish Gaelic, and more. Apart from that, he was also a scholar who studied the nature of languages, so he could probably read a wider variety of texts.

Apparently he only learned Norwegian to read Ibsen in his original language.

Most Languages Spoken By One Person

This is difficult to determine, as such a person would have to be thoroughly examined, but Ziad Fazah, born in Liberia, raised in Beirut, now living in Brazil, claims to possess the ability to speak 59 different languages.

There was an event organised by a Spanish television that was supposed to put his knowledge to test, but the results were not conclusive.

There are also some even more impressive examples from the past, but these are impossible to verify in real life. For instance, 18th-century cardinal Cardinal Giuseppe Caspar Mezzofanti was known for speaking 38 languages plus 40 different dialects. Al Farabi, a Muslim polymath from the 10th century, was credited with the knowledge of 70 languages.

If various sources are to be believed, the most proficient polyglot in human history would be Sir John Bowring, Governor of Hong Kong between 1854-1859, who was reputed to know around 200 languages, among which he could communicate in 100.

Do Polyglots Have It Easier?

Studying languages forces you to explore other countries and cultures as well, even if only through books and the internet. This is always bound to broaden your horizons and increase your cultural awareness.

What’s more, focusing on differentiating various phonemes, phones, and sounds will also sharpen your ear. It keeps your brain busy and working, which will significantly improve your learning abilities; that’s why it’s most difficult when you start learning other languages.

Most polyglots agree than after three or four languages, it becomes a lot easier.

However, the most significant or tangible benefits involve travel and business. There aren’t many things as important for establishing trust and fruitful cooperation than effective communication.

It doesn’t matter if you are a travelling politician, a celebrity promoting a movie all over the world, an employee in a multinational company, or a business owner who plans expansion abroad – knowing the target language of your audience, potential customers or partners will bring you closer together, promote trust and ensure reliability.

In short, the ability to speak other languages opens many doors for you, allowing you to reach a broader audience and appear as more engaged and approachable.

In today’s world, it is essential for everyone to speak English, whether you’re a native English speaker or not. However, every other language is an incredible asset for anyone, no matter whether you run a business or work for someone else in any given industry.

Effective communication is the key to success in virtually all aspects of our lives, and with the world the way it is today, it’s difficult to thrive speaking one language only.

Imagine a situation where you meet your significant other, but they are of a different nationality, so you communicate mainly in a foreign language; then this person makes an effort to learn your mother tongue.

It’s the same with your potential customers, business partners or any other type of audience – the nature of the feeling may differ, but the gratification is the same. It is bound to bring you closer together, whether professionally or personally.

Here at Architekst, we understand that, so we have made it our mission to make life easier for those who for some reason can’t or won’t learn a language.

No matter whether you need French, German, Italian, Spanish, Portuguese, Hebrew, Arabic, Greek, Welsh, or any other language that comes to mind, we will be ready and willing to assist you!